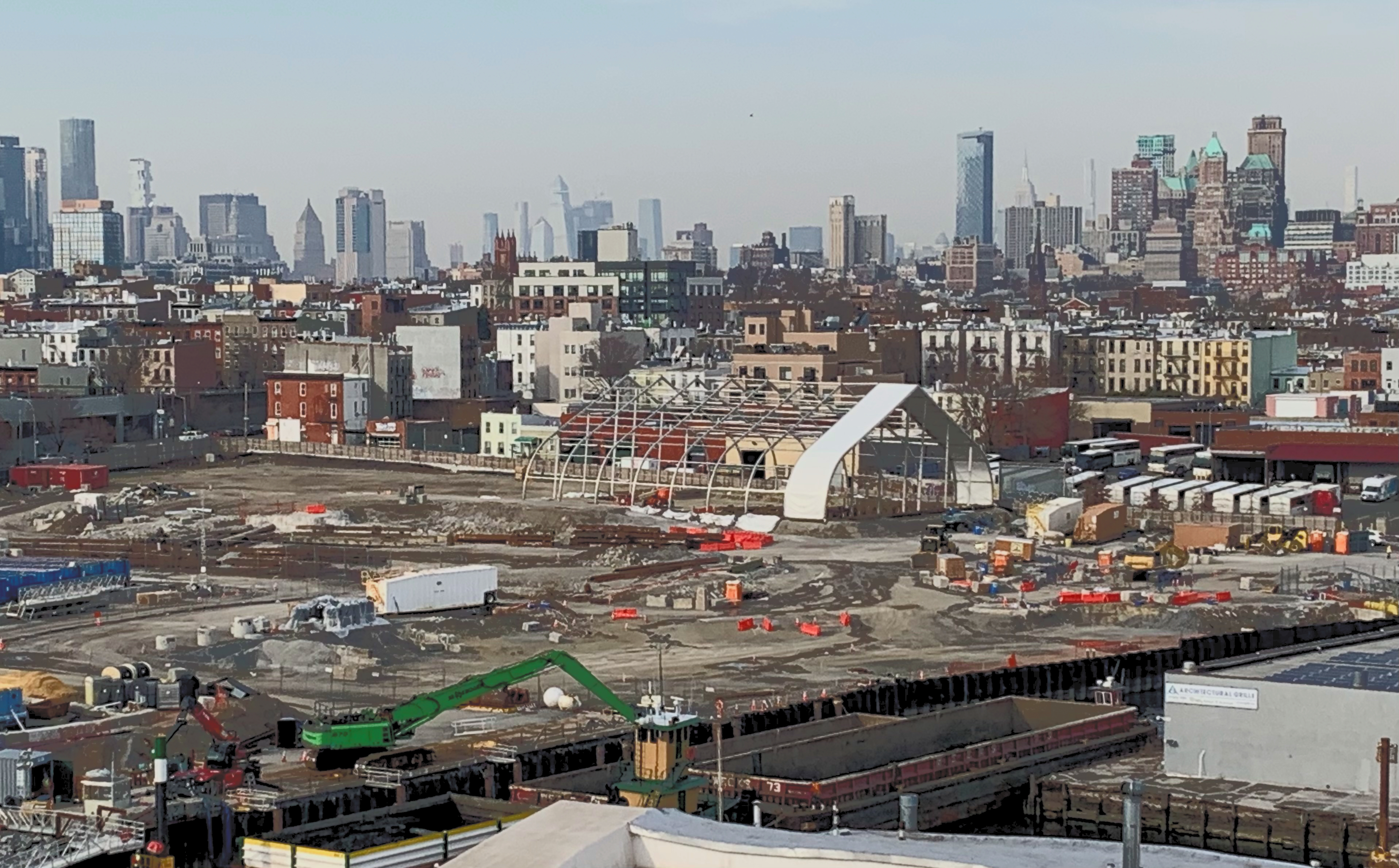 Public Place, the large empty swath of land between Smith Street and the Gowanus Canal in Carroll Gardens, may be one of the most contaminated sites in New York State and there are grave concerns that it may never be fully cleaned up despite current remediation efforts.  How did Public Place get so contaminated?
This is the site of the former Citizens Gas Company's Manufacturing Gas Plant, one of three such MGPs that once operated along the Gowanus Canal.

The Citizens Gas Company began operations in the late 1860's and then passed into the ownership of Brooklyn Union Gas (BUG) in 1895, which demolished the plant in the 1960's, when the MGP ceased operation. In subsequent years, BUG was merged with Keyspan, which was then acquired by National Grid in 2007.
What has been left behind is poisoned land. Coal tar, a highly toxic and carcinogenic by-product of the gas manufacturing process, has been allowed to migrate freely throughout the site and into the Gowanus Canal.  On Public Place, the deepest tar observed extended to approximately 153 feet below the ground surface.
Finally, after decades of exposing local residents to this toxicity, three of the four parcels that made up the former MGP site are currently being remediated by National Grid under the supervision of New York State's Department Of Environmental Conservation (DEC) through the state's Brownfield program.
However, the remediation can hardly be called a clean-up. It would be more appropriate to call it a containment, since most of the coal tar will remain in the soil forever.
Just recently, the Carroll Gardens / Gowanus community learned that DEC had allowed National Grid to significantly alter and degrade the remediation, sparking concerns that future residents would be exposed to the remaining contamination.

A look at National Grid's online repository for the Citizen's Gas Site documents reveals exactly how dangerously contaminated the site is.
According to a Remediation Investigation Report from 2005 by environmental consultant firm GEI, "groundwater moving through the areas of tar-saturated soil and residual tar will dissolve the BTEX components and light molecular weight PAHs (e.g., naphthalene). The resultant groundwater plume will migrate in the direction of groundwater flow. "
The study also revealed that in some spots, soil vapor contained elevated levels of benzene, toluene, and xylenes.

The most concerning information, however, can be found in a document entitled 2005 Final Remedial Investigation for Public Place, which can also be found in National Grid's online repository.
The community has known for a while that coal tar from Public Place has migrated into the adjacent Gowanus Canal. Local residents therefore asked if the contamination could have found its way past the other three boundaries of the site.
If one studies the report carefully, the answer, alarmingly, seems to be "YES".

The 2005 report clearly shows that pockets of coal tar have oozed underneath Smith Street, Huntington Street, as well as 4th Street at Hoyt Street, where it was detected underneath a row of buildings.
Yet, neither National Grid, nor NYC DEC admitted this important fact to local residents, though they were asked at numerous occasions at public meetings.

Below, we will guide you through the documents from the 2005 Final Remedial Investigation to reveal that contamination from the former MGP site at Public Place is no longer confined to its boundaries. 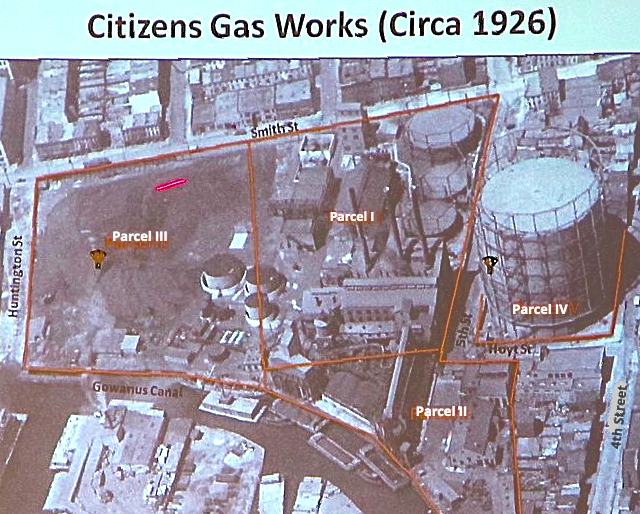 Arial view of the MGP site  in 1926, showing the various round gas holders. Parcel I with the three
holders near Smith and 5th Street apparently holds the most pollution. 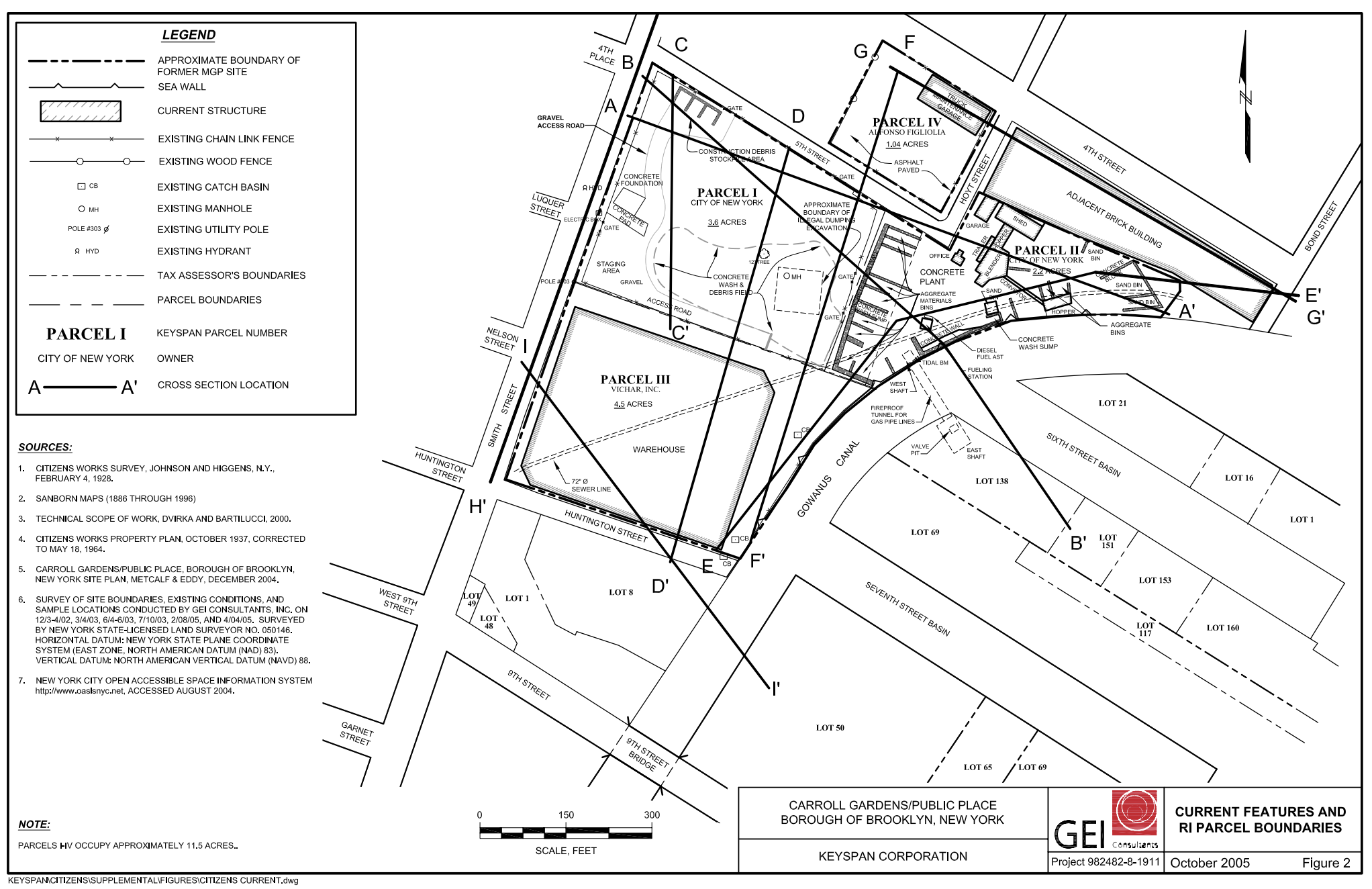 This diagram is from page 290 Of the 2005 GEI report
This particular map shows the survey of the site boundaries, as well as the cross sections (A-A' to G-G') along which soil borings were taken and ground water monitoring wells were installed by GEI. 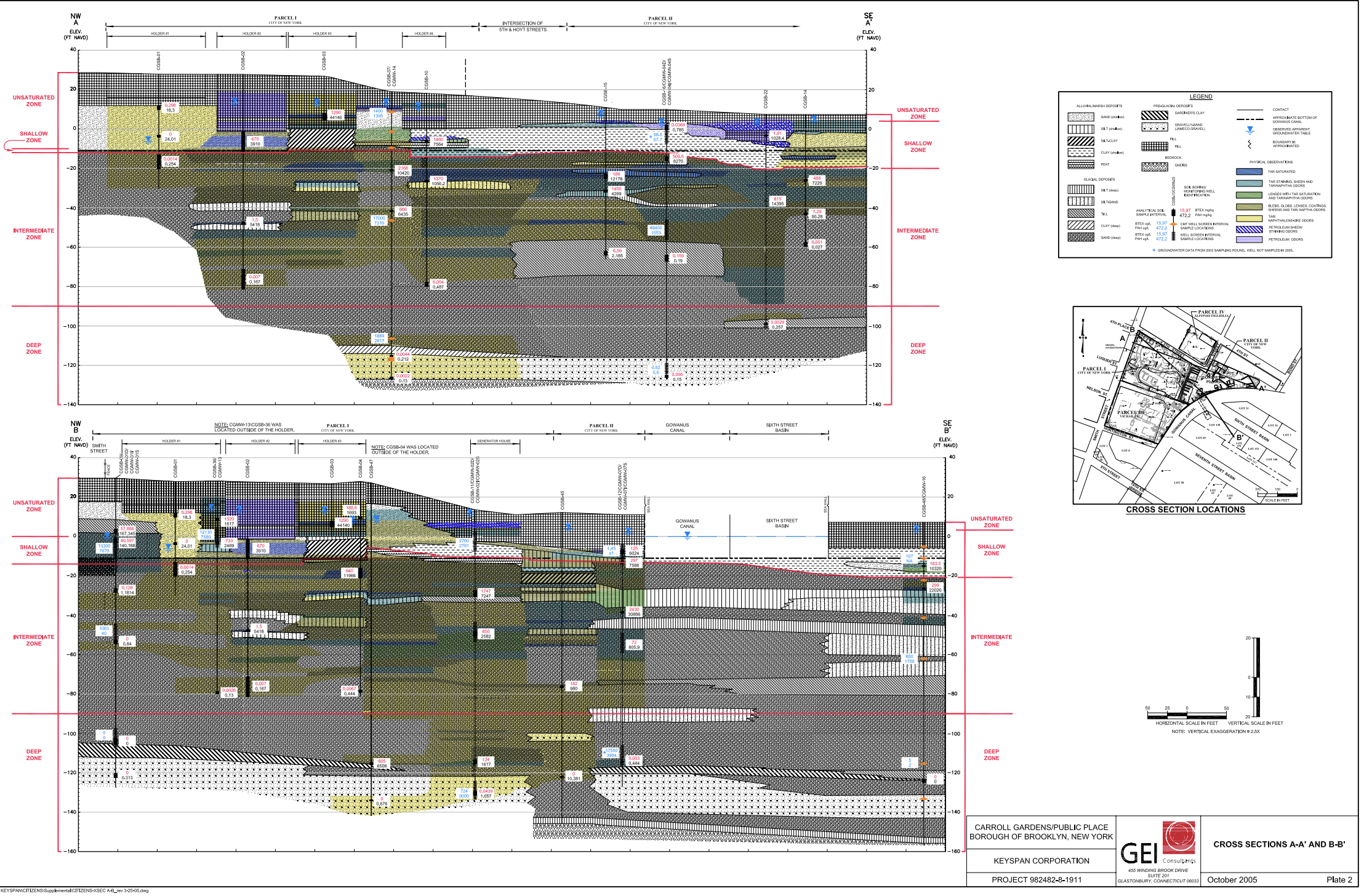 This is page 306 from the report. It shows the results of the soil samplings and ground water analysis from cross sections A-A'  and B-B'. The best way of visualizing this is by imaging cutting a straight line into a cake. The cut piece would reveal the different layers of the cake. In this instance, it shows the soils and contamination found in this cross section. 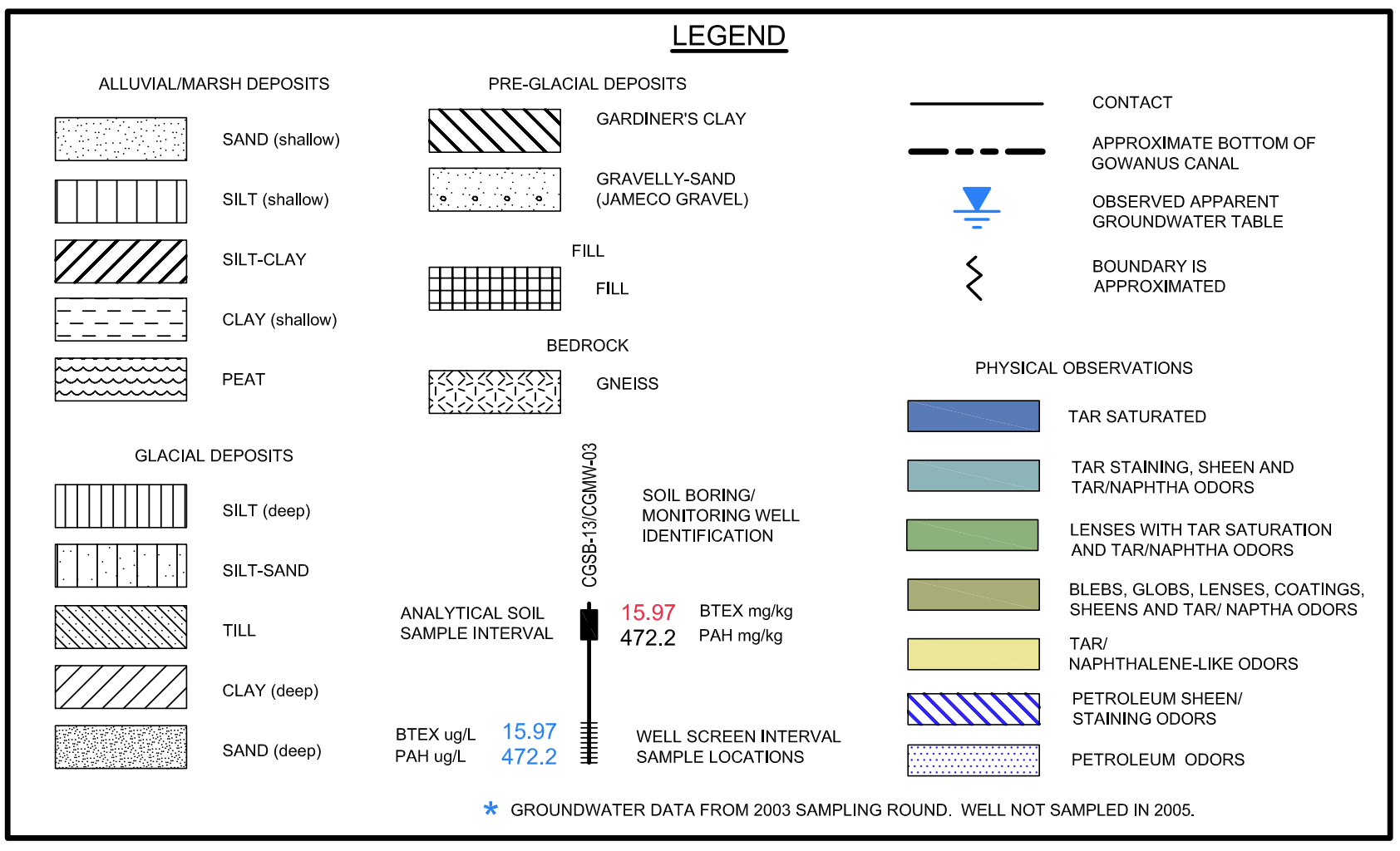 This speaks for itself, obviously, but notice that the dark blues indicate presence of coal tar. 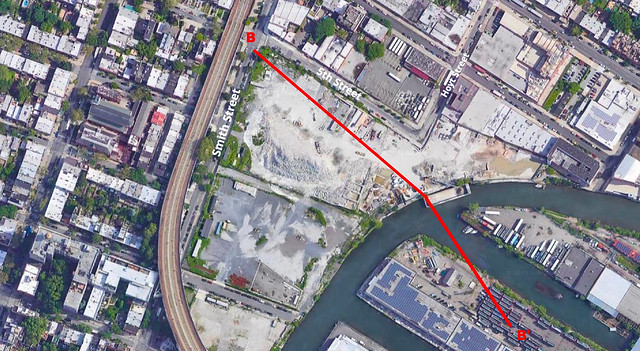 Let us take a closer look at section B-B', which starts at Smith Street on Parcel I and ends at 6th Street on the other side of the Gowanus Canal.

Here is the level of pollution found deep in the ground on Parcel I along the B-B' section. 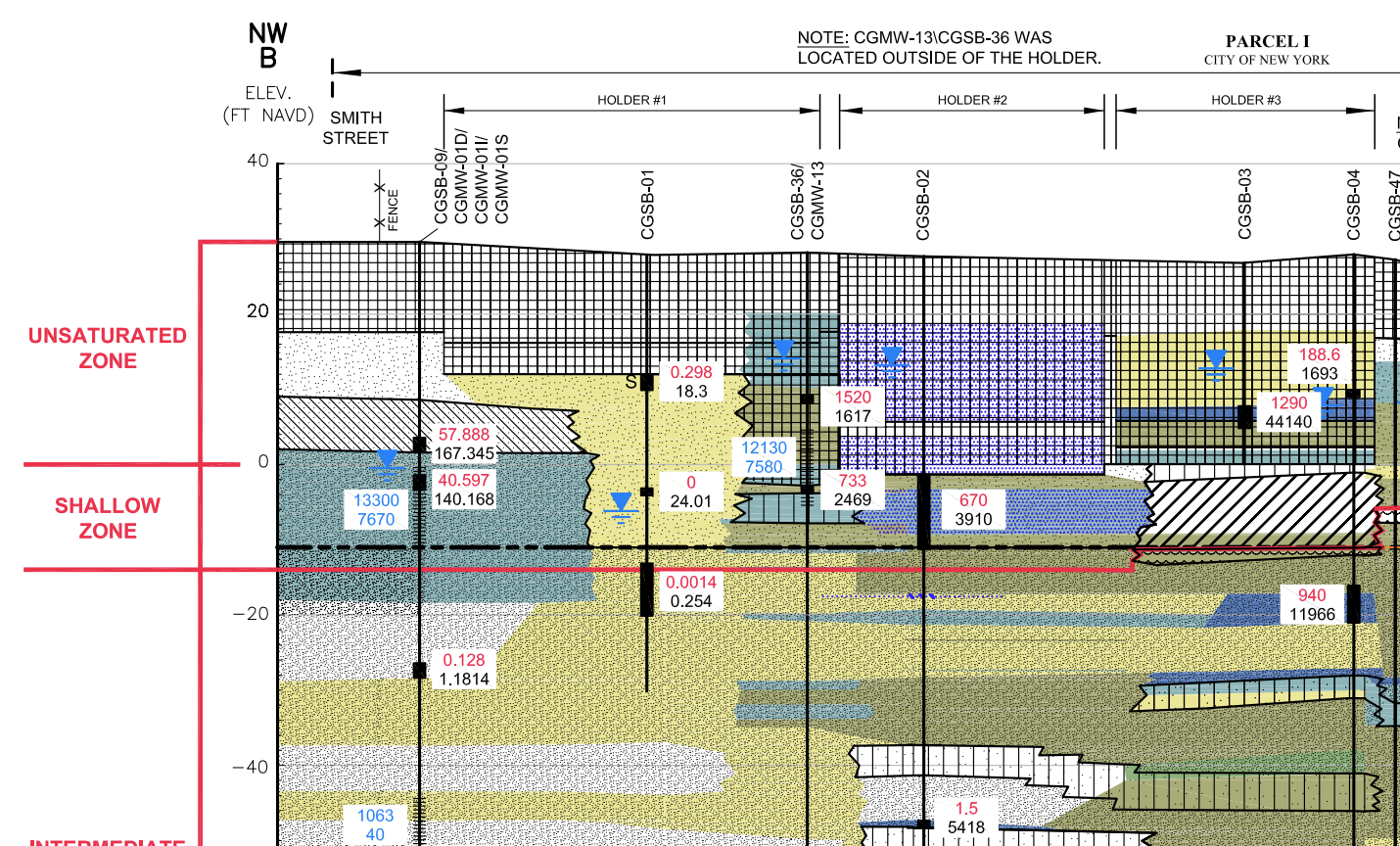 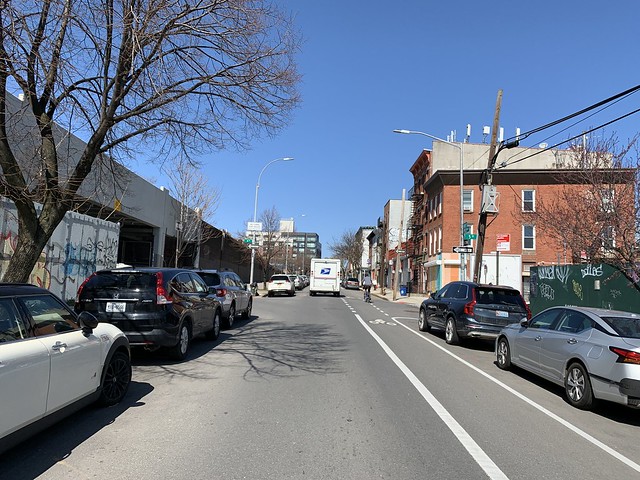 Corner of 5th Street and Smith Street, which according to cross section diagram,
indicates a pocket of contaminated ground water.
This is where it gets interesting. This is the beginning of that B cross section of Parcel 1 at the corner of Smith Street and 5th Street, where the three gas holders that can be seen in the 1929 photo were once located.
If you look at the left hand side of the diagram, you will see a turquoise section in the 'shallow zone' that indicates that "coal tar staining, sheen and odors" were observed in the groundwater at this spot. The upper blue number in the little white box shows that at this spot, the groundwater concentration of BTEX, which refers to the chemicals benzene, toluene, ethylbenzene and xylene, is 13,300 μg/mL (parts per billion). The lower number indicates PHA (Polycyclic Aromatic Hydrocarbon) at concentration of 7670 parts per billion.)
NY State regulations state that BTEX should not exceed 5 parts per billion for drinking water but there are no limits for the PHA. While nobody will be drinking the groundwater containing these chemicals, there is continuing exposure through contact with the soil and breathing the air.
Now look up at the upper left hand side and notice that the contamination at this spot actually starts past the Public Place fence line. This diagram from the 2005 report indicates clearly that the groundwater barely 30 feet (NDA) below the surface has been heavily contaminated and actually extends onto Smith Street. 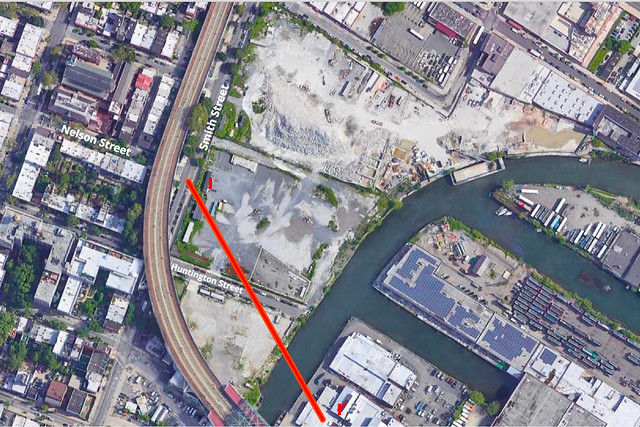 Now let us look at cross section I-I', which crosses Parcel 3 and Huntington Street, and ends across the Gowanus Canal towards 9th Street. 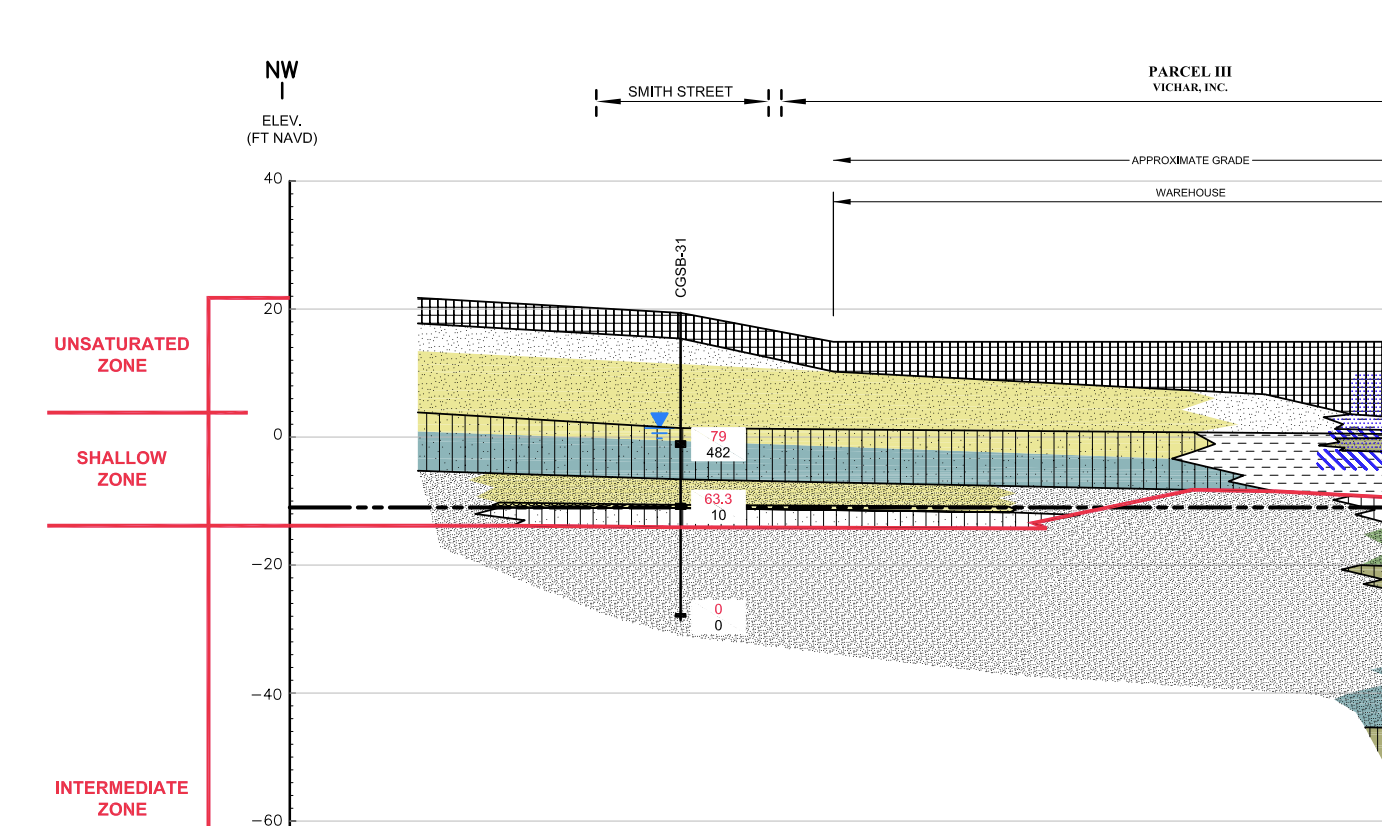 Analysis of soil borings taken at this location also indicates the presence of coal tar staining, sheen and odors. The BTEX soil concentration here is 79 parts per million, the PHA concentration is 482 per million.
Once again, notice on the top part of this diagram, that the toxins have been found outside of Parcel 3, underneath Smith Street. 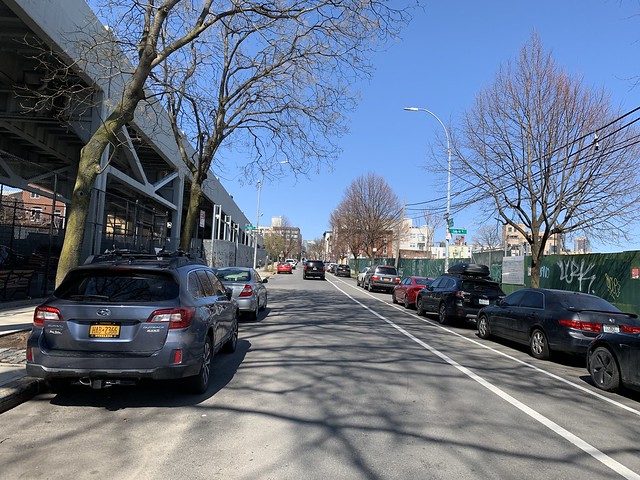 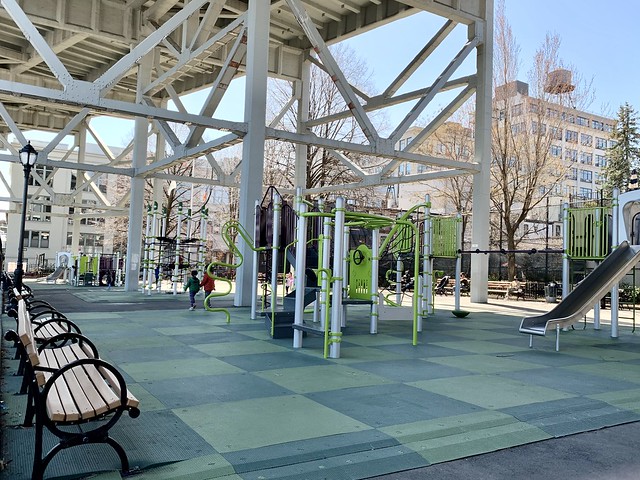 Mary Star Of The Sea Playground just steps away 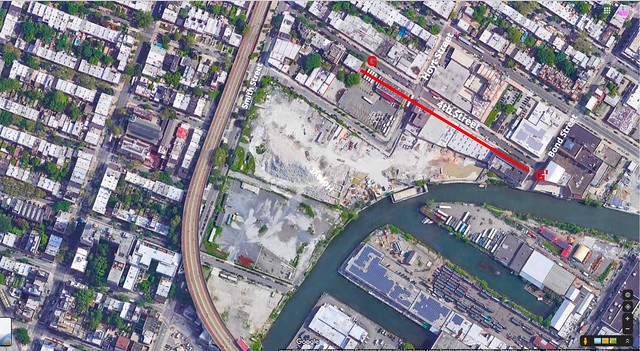 The most interesting part of the report concerns cross section G-G',
which starts on Parcel IV along 4th Street.
It is not currently being remediated by National Grid, though it is part of the former MGP site and is also contaminated. The parcel is occupied by a bus depot at the moment, and the community has been told it will be cleaned at a later time.
However, if you follow the G-G' cross section, you notice that there are actually pockets of toxic material right underneath the buildings between Hoyt Street and Bond Street. 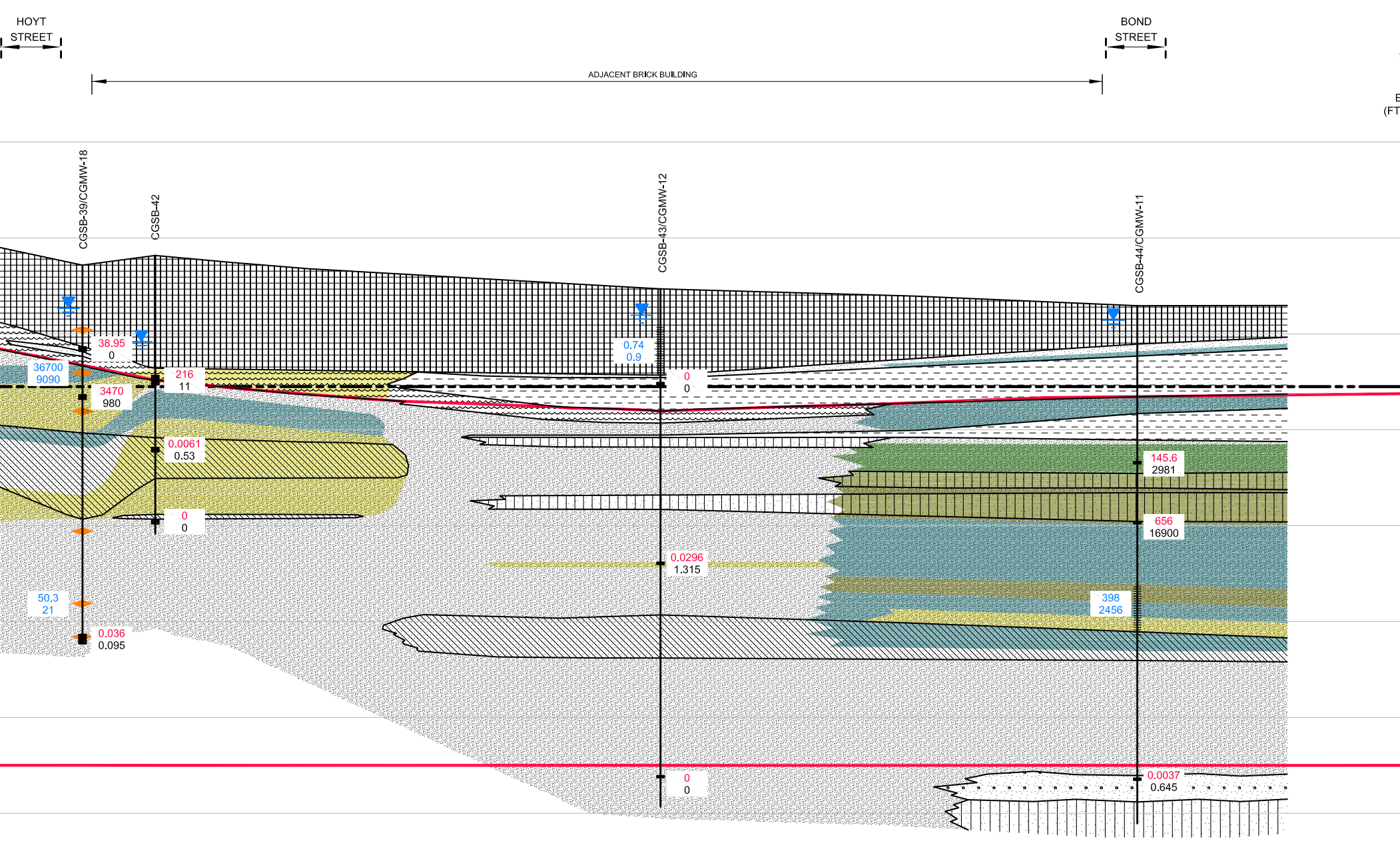 One can clearly see the pockets of contamination in the soil and ground water underneath those buildings, especially the brick building on 4th Street nearest to Bond Street. 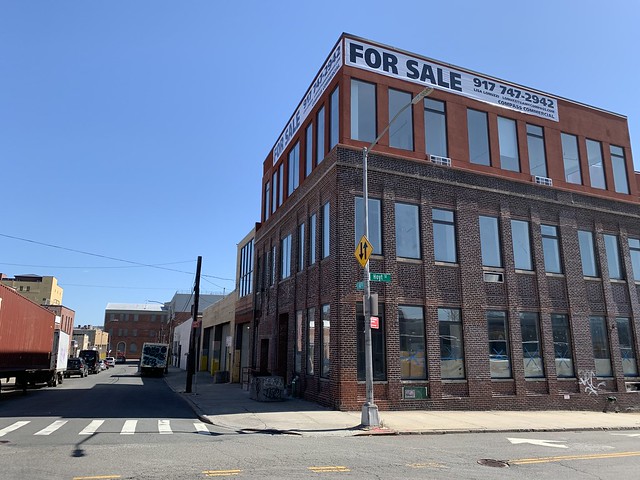 Buildings on south side of 4th Street between Hoyt and Bond Street, which show
evidence of contamination along the G-G' cross section
The 2005 Final Remedial Report for Public Place indicates widespread pockets of coal tar on all four parcels. The remedial work currently being done on Parcel I, II and III by National Grid under NYS DEC supervision only removes 2 feet of soil across those parcels, and only digs down to a maximum depth of 22 feet on Parcel 1, where the remaining subsurface structures of the former gas holders need to be removed anyway.
The report also shows that the contamination has migrated outside the boundaries of all four parcels.
It is important here to indicate that the beginning and the end of each cross section along which the soil and the ground water was tested, was strictly arbitrary. If, for example, line I-I' had extended further across Smith Street and testing had been done closer to Nelson Street, it may have shown contamination under St. Mary's Playground or, one shudders to think, under some of the homes, perhaps.
It may not have been in the interest of National Grid to find out if that is the case. However, as the lead agency overseeing the Public Place remediation, one wonders why NYS DEC did not insist on more testing, more mitigation and more barriers to prevent the contaminants from migrating outside of the site.. After all, the documents referred to above have been available since 2005.
Why is all of this so relevant?
The pollution at Public Place and the gasses they emit are dangerous to human health. Despite this knowledge, Mayor de Blasio and Councilmember Brad Lander envision Gowanus Green, a 29 story development project with 950 affordable housing units and a school on a section of Public Place that is City owned (Parcels 1 and 2). More housing is planned on the privately owned parcel 3.
As a community, we need to insist that independent testing along a wider radius of Public Place is performed. We must insure that the coal tar is not present under other adjacent buildings.
At the very least, we need to insist that no housing be built right on top of the source of the contamination on Public Place.
We are dealing with people's lives and cannot have National Grid nor NYS DEC take any shortcuts. This community has already been exposed to the harmful effects of this contamination for more than a century.
Let's organize and fight together to get the environmental clean-up we deserve and are entitled to by law.
Related reading:
National Grid's online repository for the Citizen's Gas Site documents.
2005 Final Remedial Investigation for Public Place
Pardon Me For Asking: False Claims And Questionable Oversight: Why NY State DEC Cannot Be Trusted To Supervise National Grid's Clean-Up At Public Place
Near Coasts, Rising Seas Could Also Push Up Long-Buried Toxic Contamination, NPR
Katia at 5:33 PM